All you need to see during your stay in Poros!

Shells and the Sea - Permanent Exhibition 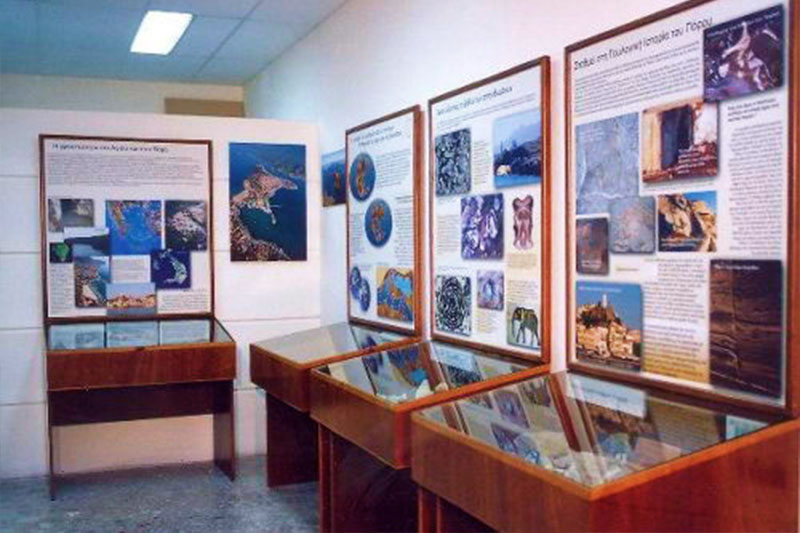 The permanent exhibition “Shells and the Sea” is housed in the ground- floor gallery of the Hatzopouleios Municipal Library.

The exhibition was curated by the University of Athens Department of Geology and Paleontology on behalf of the Municipality of Poros. The exhibits are the generous donation of Georgos and Helga Kanellakis from their personal collection.

It has been enriched with some geological, volcanic, and archaeological finds from the southern Aegean donated by the University of the Aegean. The finds are complemented by photographic material, mostly images of the surrounding seabed.

“Shells and the Sea” is the only comprehensive museum exhibition of its kind displayed in Greece to date. 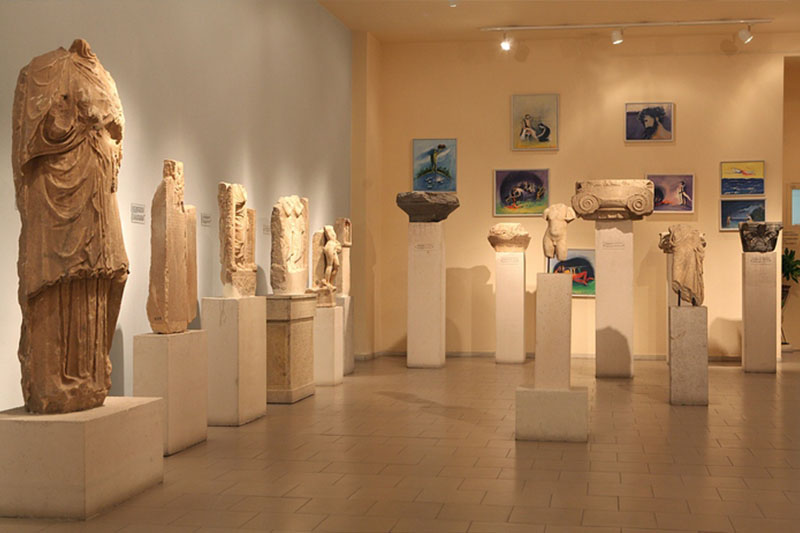 The Poros Archaeological Museum is located on Koryzi Square.

It was founded by Christos Fourniadis, an archaeology buff who made it his mission to rescue and preserve Trizinias’s antiquities.

The museum exhibits are displayed in two halls, one at ground level and one on the upper floor, with sculptures, epigraphs, architectural elements and other finds from Trizinia, Kalavria, Methana, and the Ermioni area.

The most important exhibits in the Poros archaeological collection are a large marble relief of a dog recovered from an ancient structure; a plaster mold of the Troezen stele with Themistocles’s 480 B.C. decree on the Persian invasion; a c. 600 B.C. grave marker from Methana; a 369 B.C. tributary decree by Troezen; and the signed pedestal of a bronze bust of the Roman Emperor Marcus Aurelias which was a votive from Methana (175-180 B.C.).

Exhibits span the Mycenaean Period to the Early Christian era.

The Temple of Poseidon 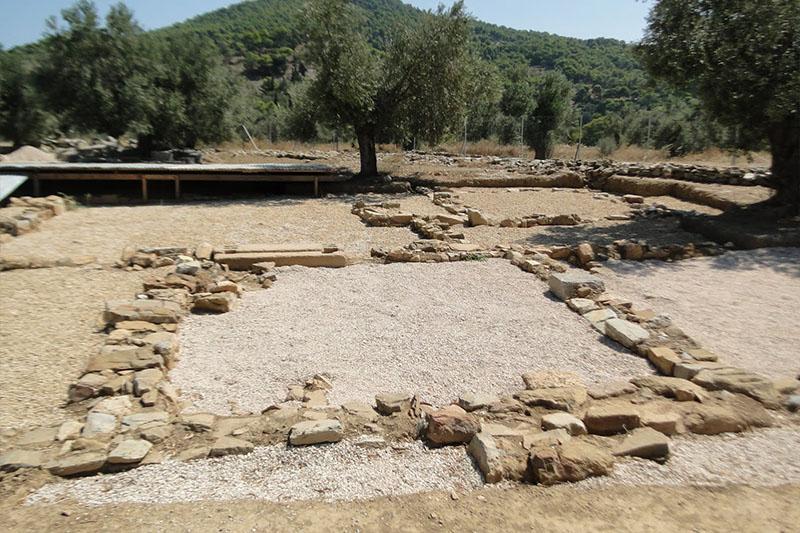 It is located at Palatia, in the saddle between the hills of Vigla and Profitis Ilias

The Temple of Poseidon has been dated to around 520 B.C. The peripteral structure was built in the Doric style, with six columns on its narrow sides and twelve on its long sides. It was one of three large sanctuaries dedicated to the sea-god Poseidon in the Saronic area and formed a triangle with the Temple of Aphaia on the island of Aegina and the Temple of Poseidon at Cape Sounio.

Ruins on the sanctuary’s southwest are likely the Kalaureia bouleuterion, or assembly, where representatives of the seven cities participating in its amphictyony net. The ruins southwest of the bouleuterion are believed to have been either a monument dedicated to the orator Demosthenes or the asclepeion, or healing temple.

Demosthenes had sought asylum at the sanctuary after fleeing the Macedonians who had seized Athens; he took his own life by swallowing poison and was buried on the sanctuary’s grounds in 322 B.C. 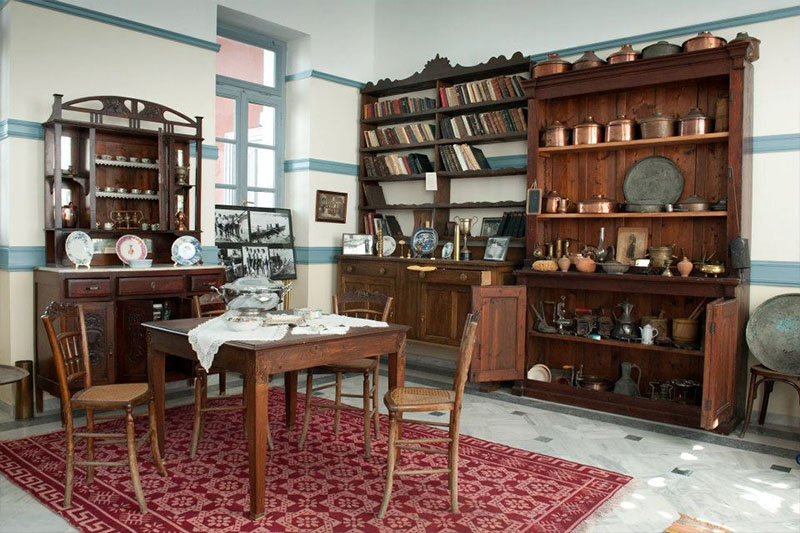 The Poros Folkloric Museum was lovingly created by the members of the Poros Women’s Cultural Association ‘Poriotissa’ founded in 2003 and is included in the association’s founding charter.

The museum’s holdings comprise largely items donated by Poriotissa members and friends or purchased for the collection. It includes a range of household utensils and other items, farm tools, traditional furnishings, a loom, embroidering, weavings, handicrafts, traditional costumes, photographs, and other items.

The Poros Folkloric Museum is registered with the Ministry of Culture. 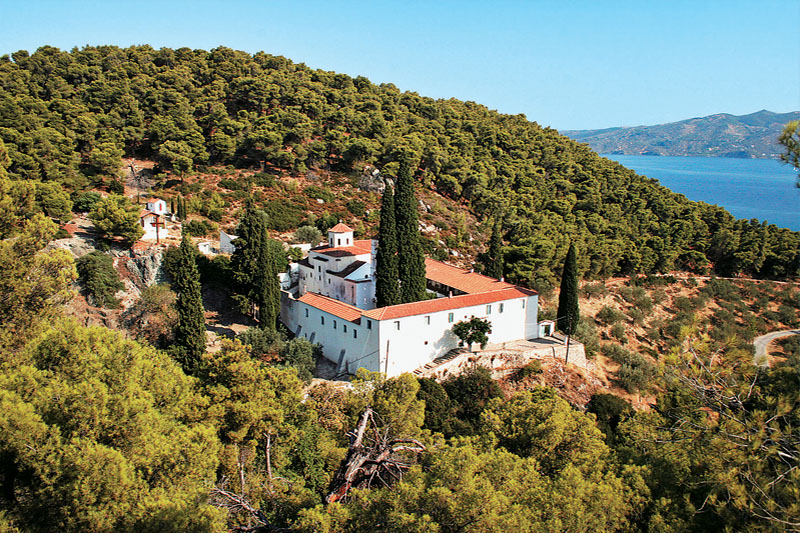 The 18th-century Monastery of Zoodohos Pigi, or means life-giving spring, is located about four kilometers from Poros Town on a pine-covered slope and is a unique example of island monastery architecture. Its name derives from the island’s only spring, which is lauded in local tradition for its healing properties.

The small compound is noted for its high walls, magical view, and church with a wood-carved iconostasis crafted in Cappadocia in the 17th century.

The icon of the Zoodohos Pigi was painted around 1850 by the Italian artist Raphael Ceccoli, who is said to have visited the monastery seeking a cure for his young daughter. Ceccoli is said to have painted the icon in his daughter’s image after she died; the girl is buried in the church courtyard.

The graves of Manolis Tombazis and Nikolaos Apostolis, admirals who fought in the 1821 independence war, are also on the monastery grounds.

Zoodohos Pigi Monastery can be reached by car or by bus, during the season. 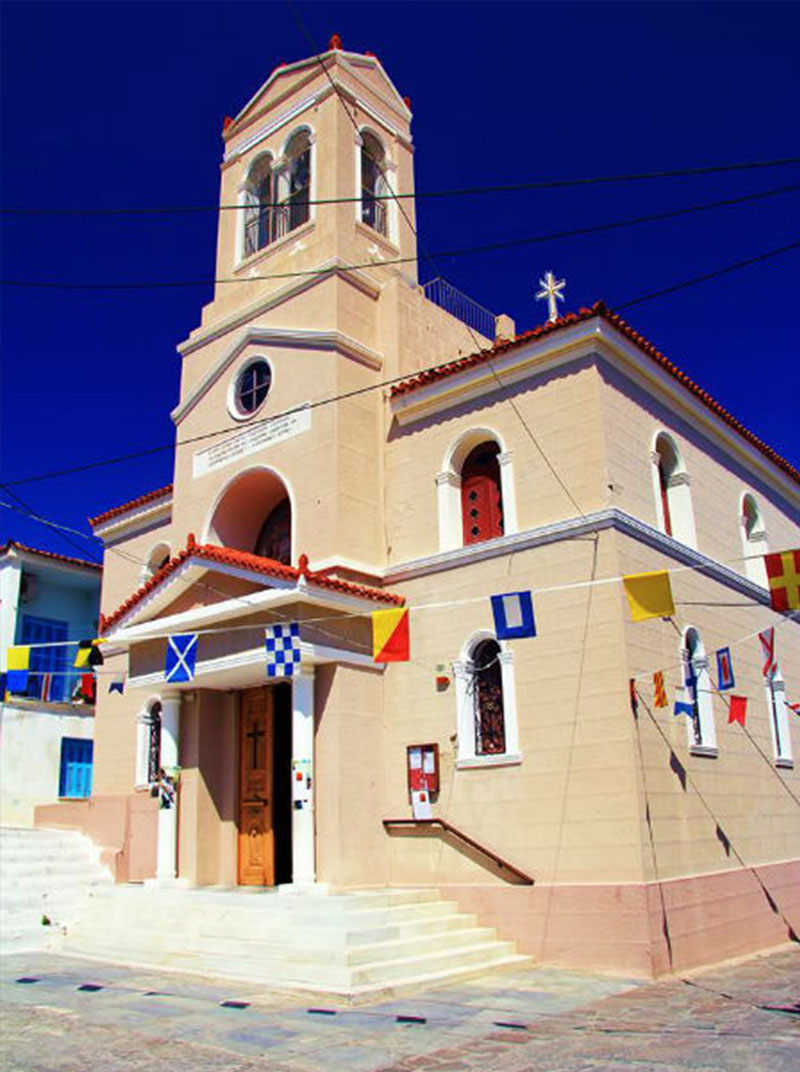 The cathedral of Agios Georgios marks the center of Poros Town’s upper sector.

The oldest surviving written reference to the church is in the 1828 census under Governor Ioannis Kapodistrias, who lived briefly on the island.

The church is widely known for its hagiography which is the work of one of the most important modern Greek artists, Konstantinos Parthenis. 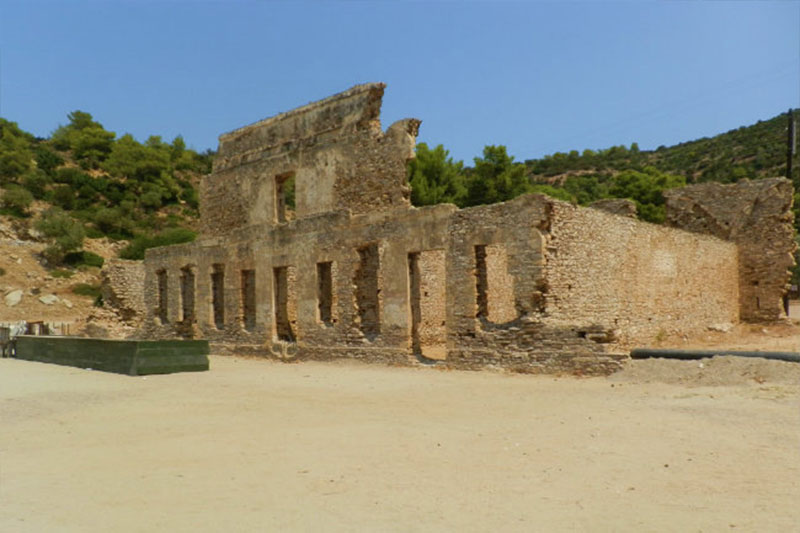 The Russian Naval Base (Rossikos) was built amphitheatrically along a picturesque bay west of the island’s harbor.

After the end of the Russo-Turkish war, Poros’s sheltered harbor served as the Russian fleet’s supply station where the Russian built an infrastructure that included kitchens for baking ship's biscuits and warehouses for storing coal and other supplies.

The facilities dell into disuse and eventual disrepair; in 1989, the Ministry of Culture declared the Russian naval base’s remnants as historically preserved monument. 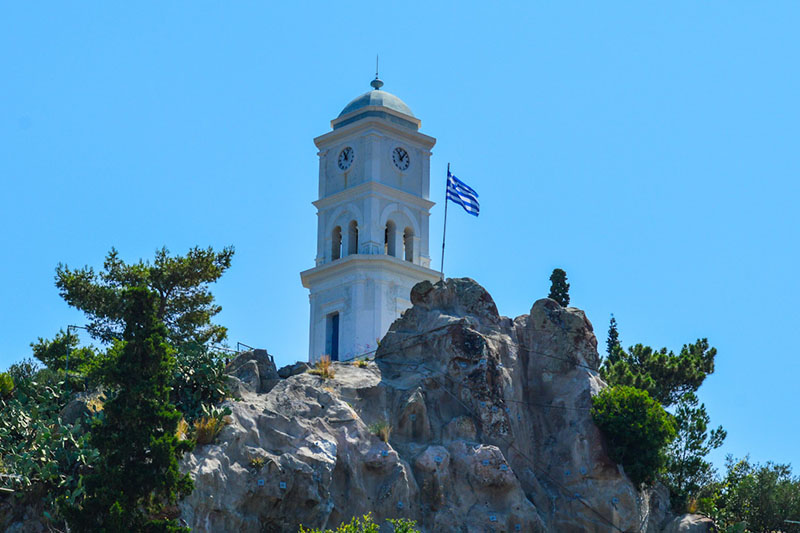 The iconic Poros clock tower (roloi) was built in 1927 with a donation by Ioannis H. Papadopoulos, a member of Parliament representing Trizina. His gift included the clock mechanism, which was made in America in 1915.

In 2000, the clock tower underwent extensive renovation to repair damage and wear. The clock mechanism was repaired in 2015 and placed in a glass case at ground level where it can be viewed by visitors. 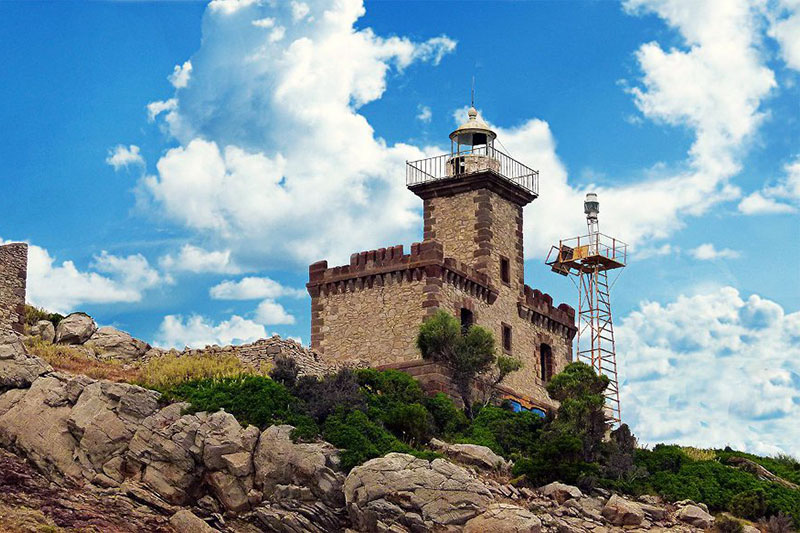 The Dana Lighthouse standing at the mouth of the Poros channel was built in 1870 by the French Society of Ottoman Lighthouses.

It is one of the prettiest stone-built square lighthouses in Greece and a monument of modern maritime history. The lighthouse rises to nine meters and its focal length reaches 32 meters.

In 2011, the Aikaterini Laskaridis Foundation completed a total restoration of the lighthouse which is now also a cultural beacon of Greece’s maritime heritage.

The lighthouse is less than six kilometers from Poros Town and can be reached over a footpath off the main road after a 15-minute hike. It is a perfect viewing point over the Saronic Gulf and the Methana peninsula.